When considering townhouses in New York, one may think of the storied brownstones of the Upper West Side or the luxurious, ornate townhouses on the Upper East Side. But these iconic, old New York–style homes are located in some unexpected places as well.

“Families, affluent buyers and creative buyers are finding unique and lovely homes in every nook and cranny of the city,” said Charles Homet, senior vice president and associate broker at Halstead Property.

This influx of development may be due in part to townhouses that were parceled off into multiple family homes now being restored back to their original glory.

“Many townhouses were converted from single-family homes to multiple-unit dwellings at various times as the city’s economy soured,” Homet said. “Conversion of these back into luxurious one-family dwellings offers great development potential.”

According to Charles Ruoff, senior vice president and associate broker at Brown Harris Stevens Brooklyn, LLC, that borough has emerged as a top market for townhouse development—but supply is limited.

“I principally represent buyers and sellers in the purchase and sale of townhouses and brownstones in downtown Brooklyn, [which includes] Brooklyn Heights, Cobble

Hill, Fort Greene, Park Slope and Prospect Heights,” he said. “We are in dire need of houses at all price points. Inventory is extremely low, and the selling prices we have been able to achieve since the fall of 2010 are in most instances higher than the prices would have been at the peak of the market, in 2007 through early 2008.”

Ruoff also sees an increase in development in the Brooklyn market to accommodate the pressing need for single-family living.

“Many of the most desirable locations in the downtown Brooklyn market are in landmark areas,” he said. “The available footprint to build is quite small. We will probably see additional building at the Brooklyn waterfront and possibly in the Gowanus area further down the road. It will be interesting to see how the Amity Street parcels in Cobble Hill, which just changed hands, will be developed.”

As the prices of townhouses have risen in the downtown Brooklyn area, up-and-coming areas in other neighborhoods have emerged, including Clinton Hill, Windsor Terrace and Kensington, as well as Ditmas Park.

“Some of these houses have more original details than mid-Manhattan homes,” she said. “Two weeks ago, I saw the most spectacular original carved Mahogany newel post in a Clinton Hill.”

But Robert remembers a Harlem townhouse that sticks out in her mind in terms of grandeur.

“If I had to choose one house which made the most enduring impression on me, the answer has to be a house in Harlem on Hamilton Terrace,” she said. “Not only was this mansion on an architectural par with just about any other house I’ve seen, but it was situated on top of a cliff. For pure drama and spectacular views, nothing can compare.”

But Lucie Holt, senior vice president and associate broker at Citi Habitats, said that in when it comes to Harlem townhouses, supply is tight.

“Harlem was years ago a big development for townhouse development because there were so many shells available and going for low prices, but that has tightened up a bit,” she said.

Cathy Taub, executive vice president and associate broker at Stribling and Associates, also names the uptown/Harlem area as a prime locale for these single-family gems.

“Harlem is home to many magnificently detailed 19th-century brownstones,” she said. “Striver’s Row in the St. Nicholas Historic District and homes in Hamilton Heights are such examples.”

But Taub agrees with Ruoff in terms of Brooklyn being a major market as well.

“Brooklyn has homes of many styles, depending on the neighborhood, as it is less densely populated and has far fewer high-rises,” she said.

And don’t forget about East Village, the storied home of hipsters and, as it turns out, townhouses alike.

“There are examples of lovely townhouses in the East Village. Of course, the village, both central and far west, is home to many fine and valuable townhouses, but I wouldn’t call that ‘off the beaten track,’” Taub said.

Roger Erickson, senior managing director at Sotheby’s International Realty, also has seen townhouses in the village, including one that he just can’t seem to forget.

“I once sold a townhouse that was in the West Village,” he said. “It was located behind a small apartment building. You walked into the building, followed a corridor to the back door, which opened to an absolutely gorgeous garden. In that garden was a charming two-story townhouse. Incredible!”

Holt also names the village as a hot area for townhouses—albeit not as expensive as those on the Upper East Side.

“The value of townhouses varies depending, of course, on where they are location-wise,” she said.

“Probably the most expensive area for townhouses would be on the Upper East Side close to Fifth and Madison, but the village is an area where they are also sought after.”

While Robert can name many notable townhouses that sit on the Upper East Side, she also mentions the area “downtown 10th Street between University and Sixth, as well as the West Village name streets, Bank, Charles and Perry,” as sought after areas, and Brooklyn Heights, Montague Terrace and Columbia Heights.

This just proves that townhouses can call other neighborhoods home.

“The Upper East Side is just one of the many neighborhoods with sought-after townhouse inventory,” Taub said. “Houses between Fifth and Madison avenues are usually quite wide and extremely expensive.

Only a rarefied group of buyers can afford those. There are many other options for townhouse buyers than just the Upper East Side.”

According to George van der Ploeg, senior vice president at Prudential Douglas Elliman Real Estate, when it comes to finding off the-beaten-path townhouses, one must simply travel downtown.

“There are tons of townhouses in these areas and all other areas that were residential before 1920,” he said. “Having said that, Tribeca is a good example of ‘off the beaten path’ since almost all of the townhouses were demolished to make way for commercial loft buildings in the 19th and early 20th centuries.”

However, increasingly popular loft-style apartments have nearly wiped out the existing inventory of townhouses in Tribeca.

“Most of the townhouses in what is now called Tribeca were demolished years ago to make way for commercial loft buildings,” van der Ploeg said. “However, a few remain, including 452 Greenwich, 27 Harrison and 39 Harrison. 153 Franklin was built a few years ago to evoke a traditional townhouse.”

“Especially downtown along the waterfront or on a cobblestone street, where one will see one or two neo-Federal brick townhouses standing alone between loft buildings, which brings a certain nostalgia and yearning for the original character of the street when there was a whole row of these quaint houses,” she said. “The commercialization of these areas has resulted in the deletion of priceless architectural remnants of the past.”

It seems that instead of moving to the suburbs upon the arrival of children, families are instead putting down roots in the city.

“The trend during the last 20 years is for urban living,” Homet said. “This has revived whole neighborhoods as buyers have looked to stay in New York rather than move to the suburbs. And there will always be buyers seeking the status and exclusivity of townhome living.” 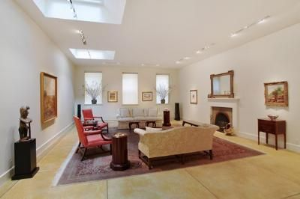